Groups is a core concept to understand in order to get the most out of Visual KPI. Groups are how all of your information is organized, a key form of navigation. It is very simple, yet very powerful.

In Visual KPI, groups work just like folders on your PC or Mac:

Note: Objects can live in multiple groups at the same time.

Organizing your KPIs and other objects into groups give you several automatic benefits:

Drilling Down Through Groups

To understand how group navigation works, let’s take a look at a concept you are familiar with: folders on your computer. 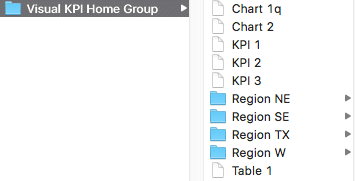 Or you may have only more groups.

You could also have only KPIs, or chart, or tables.

Here’s what this structure looks like in Visual KPI. The Home Group in the image (Example 1) below has more groups, KPIs, charts, and tables. 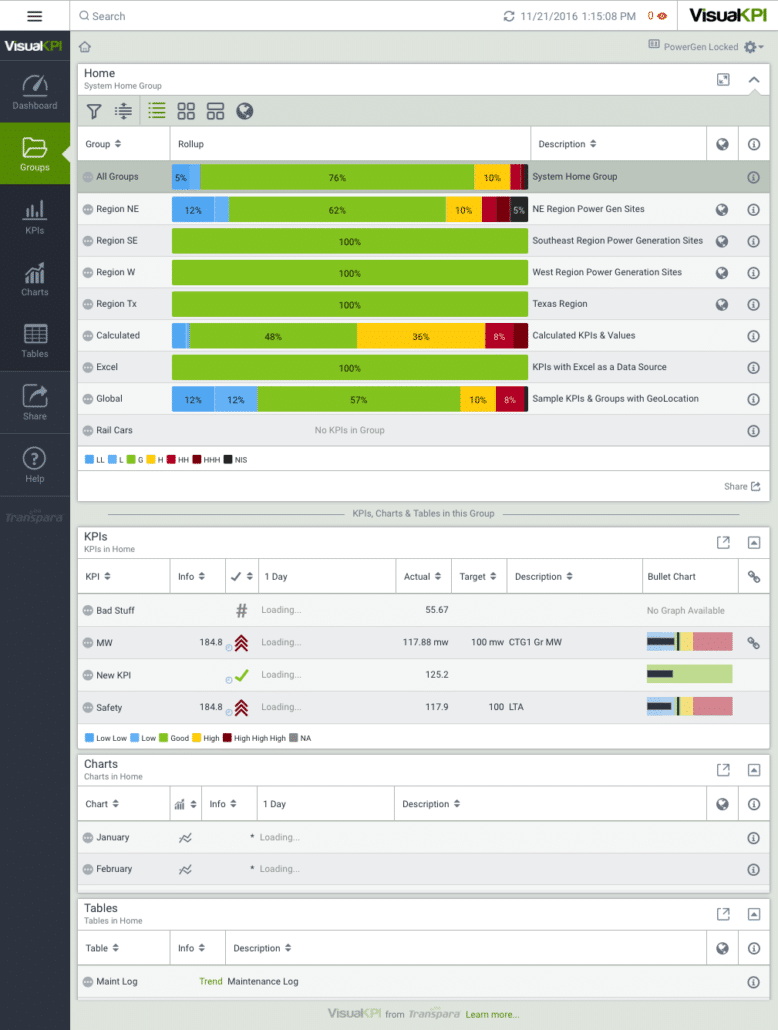 When you drill down far enough, you will have no more groups, but just objects, such as KPIs, charts, and tables. In the example below, this group has only KPIs.

And here’s what it looks like in Visual KPI (Example 2). Note that the navigation bar has switched to the KPI tab. Now you are no longer in the Groups tab but in the KPIs tab.

The same principle applies to KPIs, charts, and tables.

In the image below (Example 3), you see a group. There are no objects in this group, only more groups. But one of those groups has some KPIs. How do we know? We see the grayed-out KPIs tab. But there are no more charts or tables in any of these groups or child groups. The Charts and Tables tabs have disappeared.

And here’s what the folder structure would look like:

If you want to see child groups that may have those KPIs (or charts or tables), click the Show all descendant groups icon () or click each of those groups in the data panel to see what’s inside.

When starting from your Dashboard, or clicking the Home icon, you start at the top-level folder. If you have groups within groups, as you drill down into groups (by clicking on the Group name), Visual KPI displays breadcrumbs to show the path you have taken and to allow you to skip back up to any level you want.

The breadcrumbs are right next to the Home icon ().

When you’re ready to go back to the top-level group, just click the Home icon or the Visual KPI logo in the navigation menu.

Note: If you are in the KPI, Charts or Tables tab, clicking on the Group tab will take you to the group level of the object you are currently viewing.