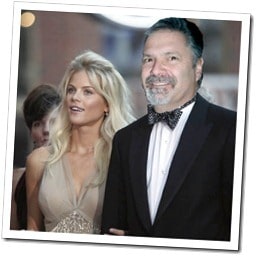 At a routine analyst briefing last week, Transpara CEO Michael Saucier was ambushed by TMZ.com and questioned about his alleged long-running affair with Elin Woods, wife of professional golfer Tiger Woods.   Tara Dugan, head of Transpara Corporate Communications, stepped in and stopped the surly reporter, who was waving around a picture taken at a recent charity ball, where Michael escorted Mrs. Woods at Tiger’s request.  Mr. Saucier explained that Tiger had asked for a favor so that he might check on some of his other properties in New York, Australia, and Dubai.   TMZ then presented dozens of other photos showing Mr. Saucier and Mrs. Woods together, at various locations including St. Bart’s, Paris, Kabul and Moscow.  At this point, Transpara General Counsel Gloria Allred put a halt to the proceedings and ushered Mr. Saucier to a waiting limo.  Since this hasty exit, nothing has been heard from the Saucier camp, fueling speculation that a multi-million dollar “hush money” deal might be in the works.

Can it possibly be?  Actually, while stranger things have happened, this wasn’t one of them.

As Tiger’s situation mushroomed over the last several days, it illustrated what can happen when facts are concealed and people are forced to “interpolate” and even “invent” data to fill in the missing gaps.  This lesson applies equally well to business, where people are expected to work in unison as a team.  Without shared access to timely, consistent, and contextual operating data, people can never truly work as a team.  They end up making assumptions and using old “rules of thumb” to overcome the lack of real performance metrics.  They end up with “dueling spreadsheets” at morning meetings – each side claiming that their spreadsheet is the true measure.  Sometimes decisions are made based on politics or gut feel instead of rational measurements.  All of this can be solved by creating a culture of transparency, where everyone has up-to-the-minute data on their most important metrics.  It is easy to keep to the intended course when you have ready access to cold, hard facts.

Might some of the 10,500 internet stories about Tiger Woods have been avoided if the facts were readily available in a timely manner?  The press might not concur, but I’m sure Accenture, Nike and a few other folks might.