Michael Gartenberg was right!  Context is almost ALL that matters since data without context is irrelevant noise.

Imagine a person running down the street screaming “8! 8! 8!” without the context of “number of Olympic Gold Medals.”  We probably could not understand the significance of this outburst and that it relates to Michael Phelp’s accomplishment from the 2008 games. It could just as easily refer to someone’s winning lotto number or Chinese good luck. 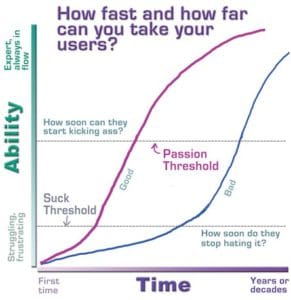 Context is what adds dimension and meaning to raw data. In software, usability and adoption rate of new features is largely governed by the quality of the context given to users—see graphic (courtesy of Kathy Sierra).

Let’s take decision-support software as an illustrative example. There are two users of this software—the person configuring the dashboards and metrics (the ADMIN) and the person using these dashboards to make operating decisions about the equipment or plant (the CONSUMER).

The time between newbie and expert at software configuration for the ADMIN is determined by the continuity of context.  Leading a person from “clueless” to “competent” to “wizard” is always about exposing and teaching incremental features and capabilities without increasing the user’s frustration level every step along the way.  People’s passion for new capabilities is inversely proportional to how pissed off they are with the implementation details.

Similarly, the CONSUMER of the software is driven by a similar curve.  If the ADMIN configuring the software has done a good job, then the CONSUMER of this software will be incrementally exposed to layers of nuance in the data, which helps him or her make decisions faster and with more confidence.  Boyd’s OODA loops are the way in which all decision-support software should be judged. The users “Observes the data, Orient themselves with context, Decide what to do, and then Act to bring about the necessary change to the environment.

Until the advent of smartphones with broadband internet access, it was absurd to think of OODA loops and context delivery for anyone but desktop software consumers.  Windows Mobile, the iPhone, Google’s Android and Palm’s new Pre all make it possible to create a desktop-like decision-making environment on a mobile device.  A decision-makers location has been rendered irrelevant, as the complete context for any decision is now available wherever they are, making today’s agile workforce capable of market and demand-driven responses only available in the dreams of our forefathers.

Delivering the contextual information users need, when they need it, is what’s critical — not any particular application or service.

Context contradicts conventional wisdom.  For one thing, feeds and speeds are no longer the defining metrics for value.  The fastest and most powerful laptop won’t do much for a user on the road if it weighs 10 pounds and gets barely an hour of battery life — or can’t open in a coach seat on a plane.  By contrast, the ability to check email, browse the web or listen to music doesn’t matter if your phone won’t make a call when you need it to.  Smart vendors will learn technology applied to context for users is what matters — especially since I think there’s an upper limit on the number of devices most people will carry with them at any given time.  As I’ve said in the past, for most of us that’s two, with a maximum of three.  The jury is out on whether the iPad could change that.

It’s time to be liberated and connected.  The dream is real — now it’s time to see more devices execute and deliver the vision.  Onward and upward (in context, of course)!